‘But is this poster CREATIVE enough?’

…Asks the fidgety project team before nervously presenting their idea to their firm’s creative guru and Don Draper equivalent.

But is this the right question to ask? Many consultancies in search of the creative with added ‘X factor’ – lose sight of the more pivotal question: Is this the right message, tone and channel to encourage our target audience to change their behaviour?

Creative marketing can be synonymous with being clever, cool, maybe a bit ‘off the wall’, and a nice play on words is never far away.

But for some audiences, who may have little knowledge of an issue, ‘fancy marketing’ can get in the way of getting messages across clearly. Creativity may delight some, but it can also confuse and alienate others.

We’ve noticed a real return to ‘Ronseal’ campaigns – marketing that does what it says on the tin, nothing more nothing less. Back to basics.

TSB’s recent brand communications are a great exemplar of the genre – crystal clear in their simplicity: the return of local banking for local people. Nothing else. Pure and simple.

Similarly everything sold at the sandwich chain ‘Eat’ underlines their brand promise – delicious, fresh uncomplicated food. The name, logo and packaging all stand in line. It’s the classic anti-brand brand. And it works. 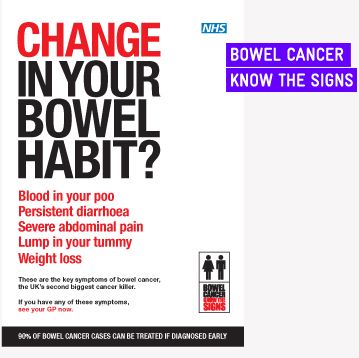 Focus groups insisted they wanted a straight talking campaign with no ‘fancy word play’. Humorous posters, some displaying a variety of beautiful bottoms with the strapline ‘Don’t look at their bum, look at yours’ were flatly rejected by the audience. Cancer was too serious an issue to beat around the bush with using humour. They wanted the facts – straight down the line.

Our campaign – ‘Bowel Cancer Know the Signs’ was bold, clear and ‘did what it said on the tin.’ It communicated the symptoms and the threat of bowel cancer in a quick, memorable ‘no bullshit’ (sorry!) way.

And it worked spectacularly – public awareness shot up and critically people seeing the GP with possible symptoms also increased dramatically.

So a lesson to marketeers – let’s follow the lead of the audience we’re talking to – if they need or like a creative jolt: let’s supply it. But for some audiences and issues – let’s get back to basics. It could even save lives.